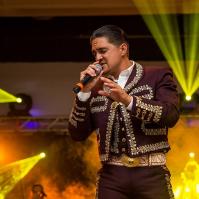 From a very young age, his passion was music, composing, and especially singing. At the age of 14, he began singing at all kinds of private parties in his hometown.

Omar starts 2015 on the right foot by taking his career to the next level with the release of “My Destiny” in March. Produced by Pepe Aguilar, the album has several outstanding elements: unreleased tracks by Manuel Flores Monterrosas (“Mi Destino” / “Entérate”), Manuel Eduardo Castro (“But There Will Be No More Crying” / “Farewell”) and Miguel Luna (“Trágame Tierra”) as well as covers of classic songs like “Nobleza” and “La Derrota”. With arrangements by Manuel Cazares and Fernando De Santiago, recorded between the United States and Mexico, "Mi Destino" is emerging as an album that defends at the same time preserves the genre of Mexican Mariachi music.